In the past, we have turned to a number of sources for the production of electricity which is used in homes and businesses everywhere. While we may have a number of hydroelectric and nuclear power plants, much of the world’s electricity is still produced using fossil fuels which pollute the air and water. 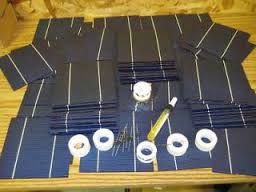 Over the past few decades, solar energy has been slowly gaining popularity in the industry. However, many insist that this progress has not been as fast as it should have been.

For most of this time, the cost for fossil fuels was negligible compared to the cost of building a solar cell. However, in the last decade, we have seen a great reduction in the cost of producing a cell and have even broke the all-important dollar per watt barrier that has prevented solar energy from being a main power source in many countries across the globe.

There are many advantages of solar energy. More and more people are turning to the sun as a sustainable source of energy for our planet. After all, it is just one giant nuclear reactor. While it will eventually burn out billions of years from now, it is none the less a consistent source of energy that can be harnessed here on Earth.

Solar energy is an environmentally friendly means of producing electricity. Sure a lot of power is expended in the creation of a cell and some of the panel construction materials may not be all that friendly to the planet, but the many years of service that a panel can offer along with the watts it can create throughout its years of service, it is none the less safer than any fossil fuel power plant. There are no gases being released by the photo-voltaic conversion process so there is absolutely no air pollution with their use.

A solar panel is just that; a panel. In order to produce electricity from the sun using solar cells, there is no need for moving parts. Granted in more advanced power plants they may be utilizing a solar tracking system which is composed of moving parts, but the panels themselves never move. As a result, the most maintenance they will see, is the regular cleaning of the protective cover glass.

Since there are no moving parts in a solar panel, there is also no noise. Noise pollution is another downside to using fossil fuels for energy production. Their combustion produces noises which can be annoying and disturbing to those nearby. A solar plant however can be placed on the roof of a building in any neighborhood and as produce reliable amounts of energy without making a sound.

Sure the cost of purchasing all of the equipment needed to run a home or a business on solar power can be expensive, but because the life of the equipment exceeds 20 years, it ends up being much cheaper. For many the initial cost is the biggest burden to bear, but the system will soon produce enough power to have you investment paid in full. Many homeowners like the idea of never paying an electric bill again.

For most people though, it is the overwhelming cost of solar panels which prevents them from installing a system in their home. The good news though, is that in the past few years, many new technologies have been introduced which have helped to lower the cost of a solar panel. Today you can find many different types to choose from such as mono and poly crystal cells, dye sensitive cells and many others. Just remember that the lower the cost, the less efficient the panel will be.

If you can also afford the battery storage system, then you never have to rely on grid energy ever again. You will be completely reliant upon your own panels to power your home all year long.

At the same time, even if you cannot afford an expensive battery bank, in many places you can use the grid as a storage system by simply selling the power company your excess power in the day time and buying back from them in the evenings.

Solar energy technology is constantly being improved every day and as each day goes by, the cost to manufacture solar cells decreases. However, do not wait forever to install your own system. Build your own system and get all the advantages of solar energy at home.